In the minds of many casual players, the differences between pool, billiards, and snooker are negligible if not nonexistent. While all three cue sports share some similarities, they all have their own nuances and set of rules. In this article, we will explain how each game is its own form of entertainment that requires its own unique equipment to be played in its purest form.

Originally, pool was a croquet-like game played outdoors, but it has since evolved to be an indoor activity. The game's rules allow for a lot of variety depending on the number of balls in play or if there are teams involved. The most common type is 8-ball pool, which is played with 16 numbered balls, with numbers 1 through 7 being solid colours and numbers 9 to 15 striped. Number 8 is kept black. To win this version of pool, you have to pocket all seven of your designated balls (stripes or solids) and then push the number 8-ball into a called pocket. You also win if your opponent accidentally pots the 8-ball.

Another popular form is 9 ball pool, which uses 9 numbered balls and a cue ball. The winner is the player who pockets the number 9 ball at any point during the game. (The order doesn't matter.)

3-ball pool is a quicker variant of the game that uses three balls. The person who can pocket all three balls with the lowest amount of shots is the winner.

Billiards is the common term for carambola billiards. It's often seen as the same game as pool - and billiards was created in similar conditions to pool - but their differences lie in where the games are played (pool is more known outside of America) and how each game is scored.

Carambola billiards is played with a set of 3 balls: one red and two white, one of which is marked. To know who starts the game, you will have to string, which can be based on an imaginary line (head string) or the number of wins (scoring string). To score points, also known as counts, you have to accomplish one of the following tasks:

Just like with most games, the player or team with the highest score wins. 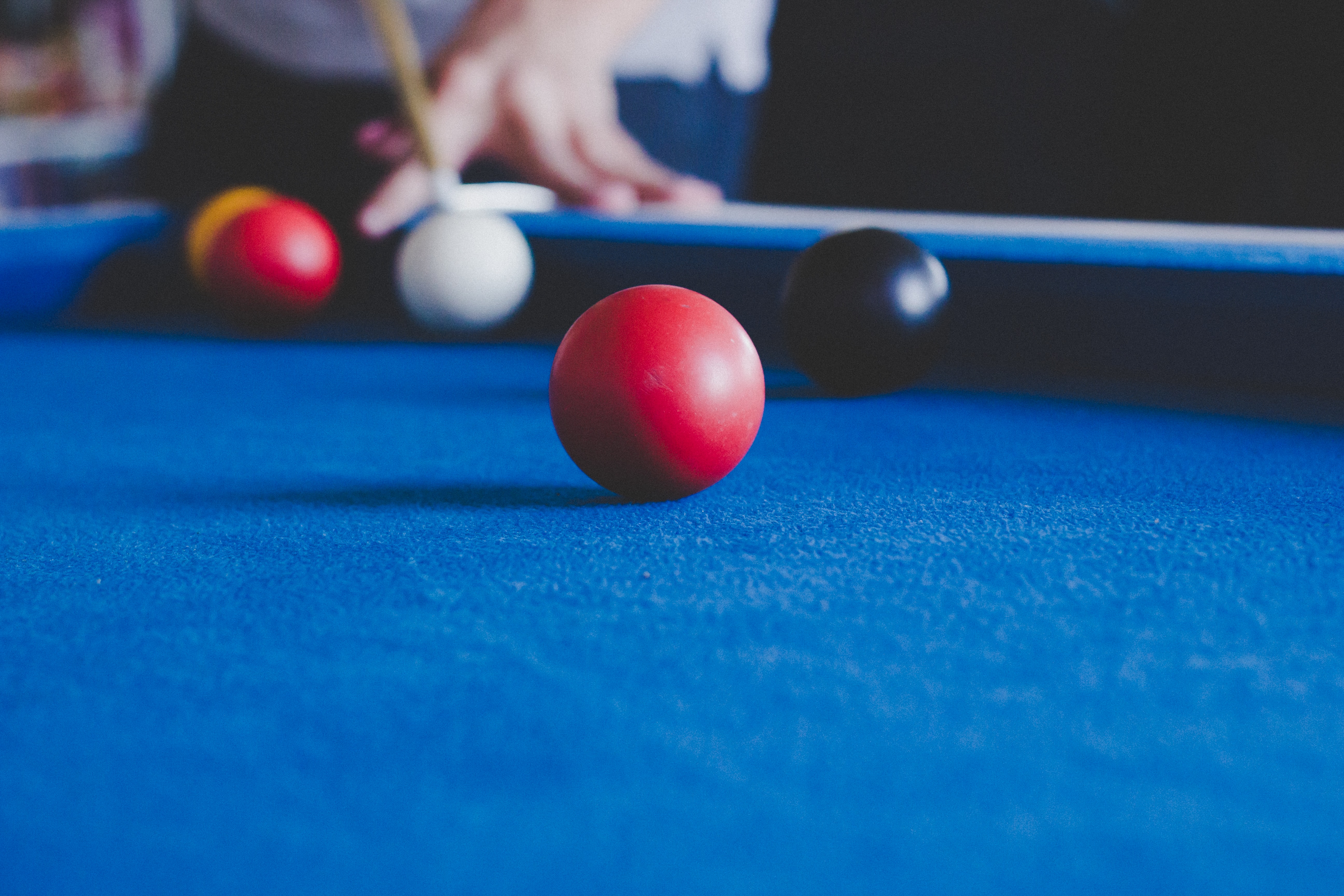 Snooker was invented in the late 1800s by army officer Sir Neville Chamberlain, and his fellow British soldiers popularized the game throughout Indian colonies. The name of the game was derived from a derogatory term for rookie personnel in the military. It found life back home as a gentleman's sport before becoming a more widespread pastime. Snooker's rules were first established in 1919 and the professional game is governed by the World Professional Billiards and Snooker Association.

Snooker is played with 15 red balls and six other balls coloured yellow, green, brown, blue, pink, and black. The game is organized into frames, which players win one by one by pocketing more red and coloured balls than their opponent. Each coloured ball has its own value. Snooker's points system goes like this:

Repeatedly pocketing red balls isn't allowed. Each red ball should be followed by one of the other coloured balls first before pocketing another red one. Pocketing the wrong ball is called a foul. When fouls occur, you do not earn any points and your opponent immediately gets another turn.

The differences in the balls needed to play snooker, billiards, and pool is not just in the number of them, but in their size.

To play snooker, you need:

Check out our premium snooker balls.

Pool standards differ depending on the type of game you're playing, but the balls do have to be 2 1/4 inches in diameter.

The subtle distinction between these cue sports is also apparent in the tables built for these games. Snooker tables are generally larger than pool or billiards tables. The English versions are massive twelve-footers, while the American variants are closer to ten feet long. Snooker tables have six pockets, but those pockets are smaller and narrower than the ones found on pool tables.

Billiards can be played on a pool table, but the tables built specifically for the game do not come with pockets. Tournament tables for billiards are usually nine feet long.

Pool, Billiards, and snooker are all great games for kids and adults alike, but it's important to know which game you want to play the most and what size of table best fits your living situation before spending any money.

Home Billiards is here to satisfy your cue sport table needs. Not only do we sell pool tables, we can also customize them to suit your preferences and budget to perfection. We also sell equipment related to other games such as table tennis, foosball, darts, and more.

If you'd like to try before you buy, stop by our pool table store in Vancouver and visit the showroom to see some of our merchandise in-person and talk through your decision process with our helpful staff. We provide free delivery and installation of pool tables to anyone in the Greater Vancouver area. If you want to schedule a delivery or have any other questions, contact us today.